How does VoIP work?

The transmission of voice communication over internet sums up the VOIP technology perfectly. Though VOIP is used worldwide by both local and business people, it is proved to be a boon for the companies / entrepreneurs whose work depends greatly on the voice calls. Such people can make / attend number of quality voice calls at the same time over a single internet connection. As VOIP technology is trending worldwide nowadays, most of the companies and people have replaced the conventional telephony with VOIP services for their convenience. 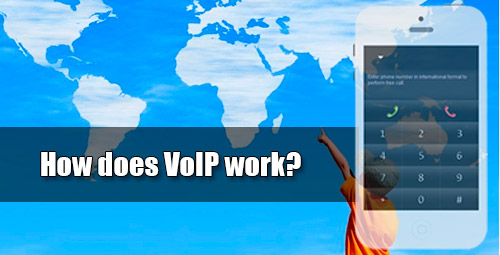 Now the question arises, how does VOIP work? Below is the simplified answer.

VOIP services transmit the signals in the form of data packets using Internet Protocol unlike the complex conventional circuits used in telephone services.

The traditional telephone services use circuit switching mechanism for transmission purpose. The telephony companies have been following this trend over hundred years and call it PSTN (Public Switched Telephone Network) for short. PSTN transmission takes place at a fixed rate of 64 kilobits per second in one direction. Since for Voice communication, two-way transmission is required so the net transmission rate would be 128 kilobits per second. Let us suppose that you made a phone call lasting for ten minutes and the total PSTN used would be 9.4 megabytes. Out of these 9.4 megabytes some of the transmission goes waste because small quick breaks during the ongoing conversations are inevitable

VOIP on the other hand uses Packet Switching technique for transmission purposes. This technique makes it quite possible to make several voice calls using same amount of space used with a single circuit-switched network. To make you understand better let us take the former example of ten minute phone call again. Using PSTN, the transmission rate for one phone call counted to be 9.4 megabytes, however using VoIP technology, you could possibly fit two or more than two calls into the same space. Thus VOIP service is not only time saving but also an excellent cost-effective option.

Protocols on which VOIP works

Most of the data networks are already familiar with VoIP technology and the use of packet switching, which obviously proves to be a great advantage. Proprietary protocols and open standards based protocols are the two basic protocols for VoIP Technology. Both the protocols define the ways in which the devices can be connected. Some of the VoIP protocols are enlisted:

Out of all these protocols, the H.323 protocol is the standard protocol created by the International Telecommunications Union. It is one of the first VoIP protocols that is implemented greatly for carrying LAN (local area network) services as well long-distance traffic. The complexity of H.323 protocol cannot be denied but it provides for real-time videoconferencing and applications of IP telephony. The second important protocol is H.323 Session Initiation Protocol (SIP). It is much is much simpler and specifically used for IP telephony.

The other new protocols such as SIP, H.323 and MGCP are undoubtedly less complex but can carry on long distance network traffic.